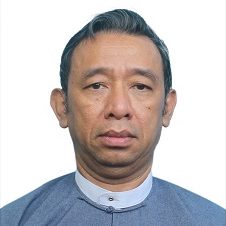 H.E. U Aung Myo Myint was born on 26 July 1964 in Zalun Township of Ayeyawady Region. He currently sits as the Permanent Representative of the Republic of the Union of Myanmar to ASEAN. Prior, he was appointed as the Director-General to the Strategic and Training Department of Myanmar in September 2019. He attained his Bachelor of Arts in 1984 from Yangon University majoring in English before pursuing a Master Degree in Southeast Asia Studies in Tsubuka University, Japan in 2005.