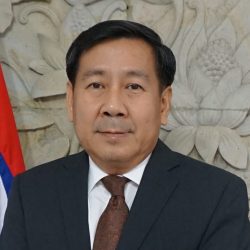 Ambassador Bovonethat graduated with a Master of Public Policy, Major of Economics and Public Policy at KDI School of Public Policy and Management in Seoul, Republic of Korea in 2002; Bachelor of Business Administration, Major of International Business Management with 1st Class Honours at University of the Thai Chamber of Commerce in Bangkok in 1997; and Diploma of Civil Engineer at the School of Communication and Transportation, Road and Bridge Engineering in Vientiane, Lao PDR.