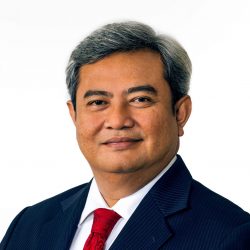 Umar Hadi has been involved in numerous negotiations and international conferences as well as various initiatives for collaborations between the Foreign Ministry and civil society organizations. He has served at the Board of Advisors of the Institute for Peace and Democracy, the implementing agency of the Bali Democracy Forum, since its inception in 2008.

He has also organized series of meetings of the Global Inter-Media Dialogue, an Indonesia-Norway joint initiative to promote inter-cultural understanding. He initiated groundbreaking collaborative projects between the Foreign Ministry and civil society organizations, among others in establishing the International Conference of Islamic Scholars and the Asia-Pacific Regional Dialogue for Interfaith Cooperation. Umar Hadi currently serves as an Executive Board Member of KAIST College of Business, South Korea. He also serves as an advisor to a number of start-up companies in Indonesia and South Korea.

He studied at the Fletcher School of Law and Diplomacy (Medford, USA), the Graduate Institute of International and Development Studies (Geneva, Switzerland), and the Padjadjaran University (Bandung, Indonesia). Umar Hadi has written, co-authored and edited several publications, including: “Islam in Indonesia: A to Z Basic Reference” (2009), “Indonesia and World Peace” (2008), “Indonesian Masterpieces at Home and Abroad” (2008), and “The Linggajati Conference: A History Book for Children” (2007). He has also produced a feature film titled “Bali: Beats of Paradise”.

He enjoys reading world history and spending time with his family, bicycles and model trains. Born 11 February 1968, Umar Hadi is married to Siti Nila Purnama Hadi. They have one daughter, Ratna Aini Hadi who currently is pursuing her Master’s degree on digital media and society at Uppsala University, Sweden.