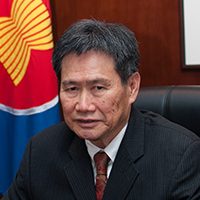 Dato Lim Jock Hoi was the Permanent Secretary at the Ministry of Foreign Affairs and Trade, Brunei Darussalam since 2006.

During his tenure, he served as Brunei Darussalams Senior Official for the ASEAN Economic Community Pillar (SEOM), APEC (Asia-Pacific Economic Cooperation) and the ASEM (Asia-Europe Meeting). He was a member of the High Level Task Force on ASEAN Economic Integration (HLTF-EI) since 2001, serving as the HLTF-EI Chair in 2017. He was Brunei Darussalams Chief Negotiator for the Trans-Pacific Partnership Agreement (TPP), as well as for the P4, precursor to the TPP negotiations. Previously, he was also the Co-Chair during the negotiations for the ASEAN-Australia-New Zealand Free Trade Area (AANZFTA), and also served as Brunei Darussalams Chief Negotiator for the Brunei Darussalam-Japan Economic Partnership Agreement (BJEPA).

From June 2011-2017, he was the Chairman of the Governing Board of the Economic Research Institute for ASEAN and East Asia (ERIA). He was also on the External Advisory Board for the ASEAN 2030 Study being undertaken by the Asian Development Bank (ADB).

He entered the Government Service as an education officer in 1977 and served as principal of a Secondary School from 1981-1985. From February 2001-July 2005, he was appointed as Director-General, International Relations and Trade Development, Ministry of Industry and Primary Resources. In September 2005, he was appointed as Deputy Permanent Secretary, Ministry of Foreign Affairs and Trade.

He graduated from the City of London Polytechnic in B.Sc (Hons) Economics in 1976 and received his Post Graduate Certificate of Education in 1977.

He was awarded The Most Honourable Order of Seri Paduka Mahkota Brunei, second Class (D.P.M.B) in 2007. He is married with two sons.