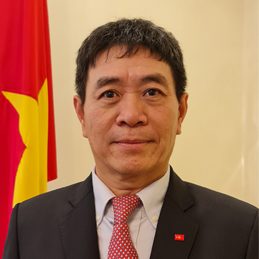 Ambassador Nguyen Hai Bang was born on 8 February 1963. He graduated from the Diplomatic Academy of Viet Nam in 1985 and had his post-graduate Study in the Former Soviet Union. He also holds a Master of Public Policy from the Kennedy School of Government (1996-1997), Harvard University. Aside from his mother tongue, he speaks English, Japanese and Russian. He is married with 3 children.