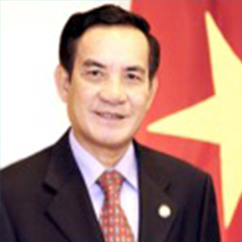 H.E. Ambassador Le Cong Phung is a veteran diplomat, formerly the Permanent Vice Minister of Ministry of Foreign Affairs of Viet Nam. During his 40-year career as diplomat, he has held various positions and built up a wide range of experience in international relations, foreign policies, international economics, international negotiations and international relations research. He was Ambassador Extraordinary and Plenipotentiary of Viet Nam to the United States and Thailand; the APEC SOM Chair for 2006 during Viet Nams Chairmanship; Head of Delegation to Viet Nam-China Boundary and Territory Negotiation; and the Chairman of Viet Nam National Commission for UNESCO.

He is married with two children.

He graduated in 1971 from the University of Diplomacy (now the Diplomatic Academy of Viet Nam).

He is fluent in English.

From 2007-2010, he was appointed as Ambassador Extraordinary and Plenipotentiary of the Socialist Republic of Vietnam to the United States of America. From 2004-2006, he was Permanent Vice Minister of Foreign Affairs. Prior to that, he was Assistant Foreign Minister and then Vice Minister of Foreign Affairs from 1999-2004. From 1997-1999, he was Director-General of South East Asia ? South Asia ? South Pacific

From 1971-1997, he worked in various positions within the Minister of Foreign Affairs of Viet Nam.