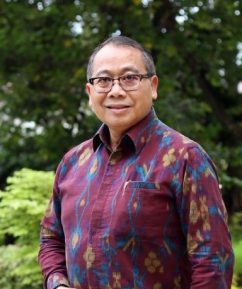 The Executive Director (ED) of ASEAN Institute for Peace and Reconciliation (ASEAN-IPR) represents the Institute in all administrative and operational matters, and manage activities of the Institute. The ED is responsible to the Governing Council, and would make regular reports on the work of the Institute to the relevant Senior Officials to the ASEAN Political-Security Community (APSC) Council.

Ambassador I Gusti Agung Wesaka Puja is currently the Executive Director of ASEAN Institute for Peace and Reconciliation (ASEAN-IPR).

Previously, he was Ambassador of the Republic of Indonesia to the Kingdom of the Netherlands, and Permanent Representative to the Organisation for the Prohibition of Chemical Weapons (OPCW) (February 2016-June 2020). He was ASEAN-SOM Leader Indonesia/Director-General for ASEAN Cooperation, Ministry of Foreign Affairs; and also served as High-Level Task Force Indonesia on ASEAN Community Post-2015 Vision (2012-2016). He also served as Ambassador Extraordinary and Plenipotentiary of Indonesia to the Republic of Austria and Republic of Slovenia, concurrently the Permanent Representative to the United Nations and other International Organisations in Vienna (March 2010-2012). In 2006-2009, he served as Ambassador/Deputy Permanent Representative of Indonesia to the United Nations, World Trade Organisation and other International Organisations in Geneva.

In addition to the above assignments, Ambassador Puja also served as Vice Chairperson of the Conference of State Parties (CSP), Chemical Weapons Convention (CWC) in 2017-2018; Governor of Indonesia to the International Atomic Energy Agency (IAEA) Board of Governors in 2011-2012; Indonesian Sherpa for the Nuclear Security Summit 2012 (2010-2011); President of the Inter-Government Committee (IGC) on Intellectual Property and Genetic Resources, Traditional Knowledge and Folklore, World Intellectual Property Organisation (WIPO); and a Member of the Indonesian Negotiators for the Aceh Peace Agreement in 2000-2005.

Ambassador Puja has been granted – among others – Ridder Grootkruis in de Orde van Oranje-Nassau/Knight Grand Cross of the Order of Orange – Nassau, The King of The Netherlands (June 2020); Ksatria Bakti Husada Arutala, Minister of Health (2011); Bintang Jasa Utama Award in 2010; and the Dharma Nusa Award in 2006.

Ambassador Puja is a graduate from Gadjah Mada University, Yogyakarta, Indonesia, and acquired his post-graduate at the University of Michigan, Ann Arbor (USA), The Horace H. Rackham School of Graduate Studies. He is married, with 2 children.