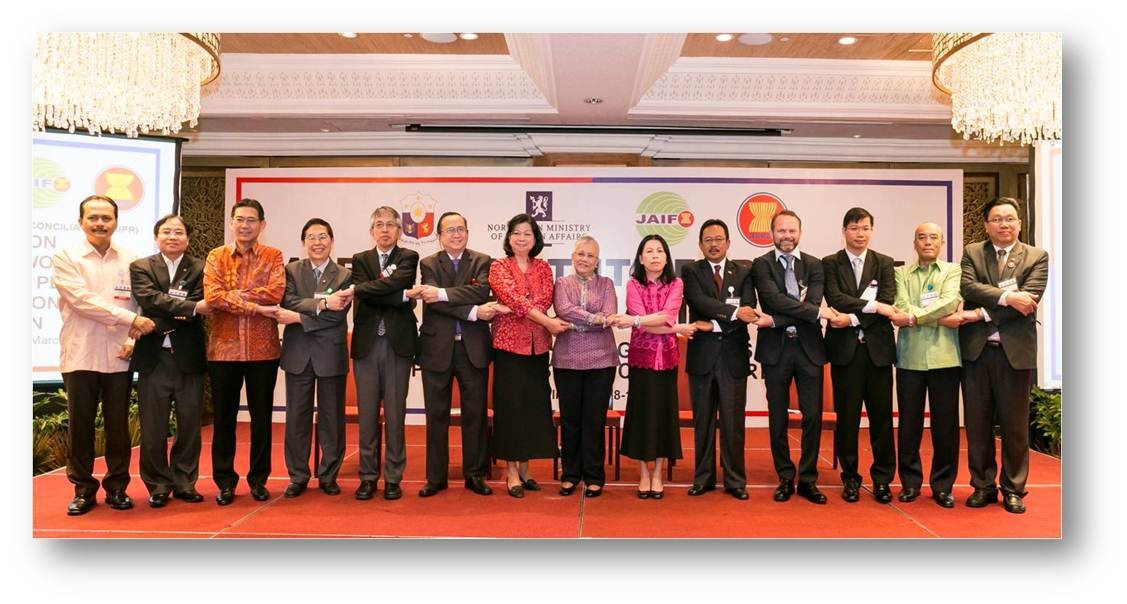 The ASEAN Institute for Peace and Reconciliation (ASEAN-IPR) held a workshop to strengthen womens participation in peace processes and conflict resolution in Cebu City from 18-19 March 2015.

The workshop aimed to highlight the level of womens participation in peace processes and conflict resolution in the region and raise awareness of United Nations Security Council Resolution (UNSCR) 1325 and existing National Action Plans on Women, Peace and Security (WPS).

The event was organized by the Permanent Mission of the Philippines to ASEAN, headed by Ambassador Elizabeth P. Buensuceso, Permanent Representative of Philippines to ASEAN and member of the ASEAN-IPR Governing Council. It was attended by members of the ASEAN-IPR Governing Council, Ambassadors of ASEAN Member States to ASEAN, Ambassadors of Japan and Norway to ASEAN, the ASEAN Secretariat and representatives from all ASEAN Member States as well as then-Philippine Undersecretary of Foreign Affairs and ASEAN Senior Officials Meeting (SOM) Leader Evan P. Garcia. The workshop was supported by the Japan-ASEAN Integration Fund 2.0 (JAIF 2.0) and the Ministry of Foreign Affairs of Norway.

The workshop was graced by then-Secretary Teresita Quintos-Deles, Philippine Presidential Adviser on the Peace Process and Member of the ASEAN-IPR Advisory Board, who, in her keynote address, emphasized that, the voice of ASEAN has always been important for all generations of Filipinos. This is true whether we speak of human progress or human security. ASEAN has been the repository of our most ardent aspirations forged in deep commonalities of culture, identity, and ways of transformation.

The workshop also raised the possibility of ASEAN-IPR establishing a closer link with UN Women, which is in line with the implementation of the ASEAN-UN Plan of Action to strengthen ASEAN-UN relations.

Executive Summary of the Workshop

The objectives of the Workshop were to: 1) locate the situation of the different ASEAN member-states along the peace-armed conflict continuum and surface the level of womens participation in the processes being undertaken by member-states to end violent conflicts internally and/or in the region; 2) raise attention on and appreciation of the UNSC Resolution 1325 and the NAP as an instrument for developing and consolidating WPS imperatives for UN member-states; 3) provide a venue to explore and learn from some existing good practices in promoting and enhancing womens participation in peace processes worldwide; and 4) provide a platform for the development of appropriate and timely agenda and the appropriate networks for pursuing such agenda on national and regional levels.

The session on Overview of Womens Participation in Peace Processes among ASEAN Member States presented some examples from Indonesia, Myanmar, Thailand and the Philippines. The resource persons all noted that signing the peace agreement is the relatively easy part, and what is difficult, and certainly more important, is the implementation of the signed deal. It also discussed the importance of women and level of involvement of countries, as well as the perspective of the armed groups and emphasized the value of having both men and women work for peace. Resource persons also presented information on women combatants, reintegration packages, combatants in large numbers and how to deal with them and stressed that with ASEAN-IPR, the region should be able to engage more and learn how people can change for the better.

It was reiterated that a peace process is not mathematical in the sense that you can play around with it, but it a recipe that definitely needs to have the right ingredients in order for it to prosper. It is also important to consider the worst case scenarios when negotiating for the peace, and put into place contingency plans in order to maintain the peace process.

As for the practices that allowed the peace process to move forward resource persons it is important to give the armed groups assurances that they will not be destroyed when they come into a peace agreement. It was noted that at times, peace practitioners often talk about the technical aspects of the peace process, but do not address the psychological aspect, where the fears of the combatants are addressed, where the combatants are assured that their dignity will not be taken away from them as a result of the peace process, then they will sit and talk.

The peace process must include political and security arrangements for the combatants, where they are given an opportunity to participate in the political arena, through non-violent and democratic means. It is also important to disarm, rehabilitate and reintegrate the former combatants into society. This can be done through training courses where the participants can get a common sense that living in peace within society is the better alternative to being a combatant in the jungle outside of society.

The Office of the Presidential Adviser on the Peace Process also proposed that ASEAN-IPR come up with a resolution creating an ASEAN network of women in peace and negotiation work given that women practitioners in the region are few, there is so much that they can learn from one another, as well as give each other the strength to move forward. While it was generally agreed that implementation of the peace agreement is the more difficult part, negotiating for the peace is likewise difficult. Peace negotiations need a certain level of confidentiality, which means that the public is not made aware of certain compromises made at the negotiating table. When the time for implementation of the agreement comes, then this is the only time these compromises are made clear, and the public sometimes does not agree with them. However, it was underscored that these compromises are necessary in order to move the process forward.

The session on United Nations Security Council Resolution 1325 as an instrument for developing and consolidating Women, Peace and Security (WPS) imperatives for UN Member States, discussed the history and implementation of UNSCR 1325 and provided an overview of various UN instruments on women, human rights, peace and security. It was emphasized that inclusive peace building is composite, having many parties involved in peacemaking and that UNSCR 1325 is the rubric by which the participation of women in peace processes is assessed. Resource persons from UN Women also talked about the framework of UNSCR 1325 as well as the 3Ps +1 that form the core of UNSCR 1325: participation, protection, prosecution, and the fourth P which represents the prosecution of sexual violence during conflict. It was noted that the Plan is not an end unto itself, but is meant to achieve something, which is to create internal and external checklists and accountability mechanisms for increasing womens participation. While UN members have already agreed to a target participation of 33%, many are still not maintaining those figures. But the development of a National Action Plan is a way for countries to keep themselves accountable to this target.

Resource persons also shared that one good example of a female negotiator is Ms. Mary Robinson, who was appointed by the UN as the chief negotiator for the Great Lakes region. In the UN Secretary Generals report for 2013, the UN had led some 11 negotiating processes and that a woman was part of every negotiating team. However, it was underscored that the UN has a long way to go and that more can be done to further implement the provisions of UNSCR 1325.

During the session on Developing a National and regional Agenda to promote Womens Participation in Peace Processes, the Philippine Office of the Presidential Adviser on the Peace Process (OPAPP), emphasized that armed conflict is a gendered crisis that impacts men and women differently. Some highlights of the Philippine National Action Plan (NAP) on Women, Peace and Security and highlighted its beginnings and current status. The workshop also noted that despite some progress, women still continue to be underrepresented in decision-making bodies involved in conflict prevention, resolution, protection, and peacebuilding.

The session also discussed the challenges of mainstreaming, especially when it comes to funding. Resource persons noted that there already is fatigue on the part of donors on gender issues, and that funding support generally goes to other issues which are more prestigious and has better and faster return for investment. OPAPP also noted that in addition to donor-fatigue, there is also planning fatigue on the part of the implementers, pointing out that the Philippines has been trying to mainstream gender for many years and that there is no real understanding as to what mainstreaming really means.

The session on Best Practices on Women, Peace and Security, Ms. Miriam Coronel-Ferrer, the Chairperson of the GPH Panel for Peace Negotiations with the Moro Islamic Liberation Front, delivered a presentation on the gender dimension in the Bangsamoro Basic Law. She described the processes, mechanisms, and features of the Bangsamoro Peace Process that showed the empowerment and involvement of women. She also mentioned the efforts of the Government of the Philippines including the National Action Plan on Women, Peace, and Security that support these.

A resource person from the Norwegian Special Envoy to the Philippine Peace Process with the National Democratic Front of the Philippines also shared best practices on Women, Peace, and Security and highlighted Norways work towards peace and reconciliation and enumerated the five principles that it works by: dialogue, long term perspective, ownership by the parties of the process, cross partnership, and inclusivity. Workshop participants took note of the advice on how to involve women in Peace Processes such as recruitment, training, providing hands-on-experience, and appointing them to positions of influence. The possibility of involving women in Track 2 mechanisms was also raised, citing the examples of countries like Guatemala, Nepal, Sri Lanka, Afghanistan, and Syria. She also cited the involvement of women in Track 1 activities in countries like Colombia, Sri Lanka, and the Philippines.

In response to a question from the floor on the advantages and challenges of being a woman negotiator during the peace talks, Prof. Coronel-Ferrer responded that there were several strategies employed to be able to include gender elements in the Bangsamoro Basic Law, and that the negotiating team had to do it in different ways. As an example of a soft approach, Dr. Coronel-Ferrer said that the women negotiators gave chocolates to the members of the other panel during Valentines Day, in order to get them to discuss the inclusion of meaningful participation of women in the political arena. She said that there was a lot of pressure coming from all around in terms of negotiating for these provisions to be included in the peace agreement, but that they were able to move forward because they negotiated for these with the women directly.

As for the advantage of being a woman negotiator, Prof. Coronel-Ferrer said that one advantage was that during the negotiations, the women were able to control their emotions when the emotional level at the discussions were going up. She was quick to point out that the whole government panel worked as a team, and that both the men and the women contributed to the success of the negotiations. On the challenges, Prof. Coronel-Ferrer said that they faced difficulties facing the recent setbacks to the peace process. She pointed out that the women negotiators had been demonized along with the peace process, but that the real challenge is communication and addressing biases and prejudices. She said that there are a lot of things that have been misunderstood about the peace process. She said that as it is now election time in the Philippines and the negotiating team has a lot of work in terms of communication so that the biases and prejudices of the general public are not tweaked to suit certain political agendas.

Recommendations of the Workshop

Amb. Buensuceso advised the participants to actively get involved in translating these recommendations to actual implementation in view of the limited time and resources of the ASEAN-IPR which can then assist the project proponents by seeking funding and approval of the projects by relevant ASEAN bodies for implementation. She also shared the interest of ASEAN Dialogue Partners in mainstreaming women in the three community pillars.