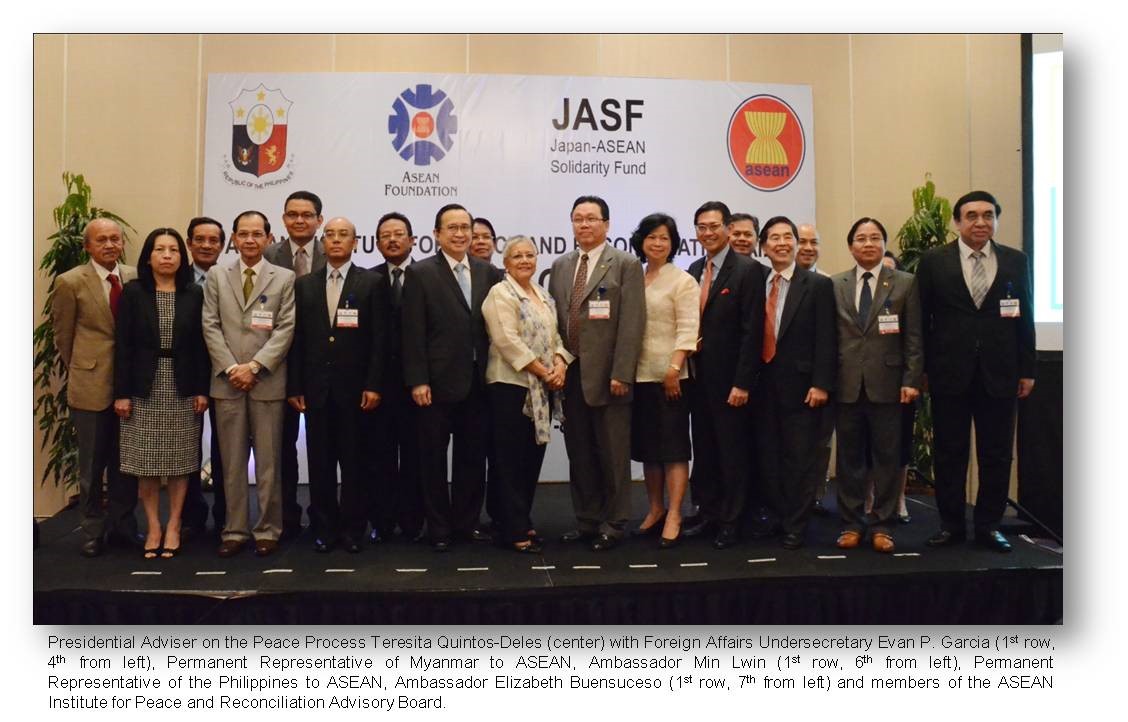 Symposium on Peace and Reconciliation, Processes and Initiatives

ASEAN-IPR Symposium on Peace and Reconciliation Processes and Initiatives

The Comprehensive Peace Agreement on the Bangsamoro (CAB), signed in April 2014, was put under the spotlight during the Symposium on Peace and Reconciliation Processes and Initiatives held by the ASEAN Institute for Peace and Reconciliation (ASEAN-IPR) in the same week. Members of the ASEAN-IPR Governing Council and Advisory Board gathered for the two-day symposium to listen to the ideas and experiences of renowned experts in peace and mediation initiatives. The symposium came a few days after the historic signing of the CAB, hailed as a major step by peace advocates all throughout the world.

The Philippines experience with the CAB was part of the Symposiums five sessions of presentations which were meant to help give the ASEAN-IPR Governing Council an overview of the peace and reconciliation initiatives being undertaken in the region and throughout the world and to pick up on best practices in peace and mediation efforts. The Governing Council is the highest policy-making body of the ASEAN-IPR and will set the future direction of the ASEAN Institute.

Then Presidential Adviser on the Peace Process Teresita Quintos-Deles, who at the time served as the Philippines representative to the ASEAN-IPR Advisory Board, keynoted the symposium, saying that the ASEAN-IPR must be strengthened as a strategic force not only for peace, but for human freedom, common prosperity and collective security throughout our region.

She said the ASEAN-IPR should look beyond its mandate of conducting research and capacity-building, and consider gathering and consolidating all the narratives of peace in the region over the decades, extracting the lessons learned and best practices, and forging a consensus of how to move forward on future challenges.

The documentation of conflict resolution and preventive diplomacy in ASEAN could be a vital resource not only for the region but for the whole world, Secretary Deles emphasized.”

Lessons learned across our organization could guide governments and civil society in several parts of the world where strife has reared its head, where workers for peace are on constant search for ways to silence guns and tempers that flare in the heat of anger and misunderstanding. Here in our own turf, the ASEAN-IPR needs to explore ways for the ASEAN and its member states to strengthen their capacity in early warning, good offices, mediation, and conciliation. We must not only wage peace by stopping hostilities, but by making sure that the gains of peace processes benefit those who need it most, she added.

Philippine Department of Foreign Affairs then-Undersecretary for Policy, Evan P. Garcia, who delivered the opening remarks, said that the symposium is a landmark event, with all the ASEAN-IPR Governing Council members and ASEAN-IPR Advisory Board members present. We have in our midst the initial pool of experts from ASEAN Member States who will assist ASEAN on conflict management and conflict resolution activities in the future.

Other speakers during the Symposium included H.E. Gunnar Stlsett, Bishop Emeritus of Oslo, Norway and Special Advisor to the Norwegian Ministry of Foreign Affairs and Member of the Nobel Peace Prize Committee; Dr. Michael Vatikiotis, Asian Regional Director of the Center for Humanitarian Dialogue; former Indonesian Ambassador and ASEAN-IPR Advisory Board Member Ms. Artauli R.M.P. Tobing; Rodolfo C. Severino, Head of the ASEAN Studies Center of the Institute of Southeast Asian Studies in Singapore and Former Secretary-General of ASEAN; Associate Dean Prof. Joseph Chinyong Liow of the S. Rajaratnam School of International Studies (RSIS) and Member of the ASEAN-IPR Advisory Board; Dr. Julian Vassallo, Charg dAffaires of the Delegation of the European Union to the Philippines; Prof. Sukehiro Hasegawa of the UN University and Hosei University and former Special Representative of the UN Secretary General to Timor-Leste; and Executive Director Ms. Rahimah Abdulrahim of the Habibie Center in Indonesia.

Philippine Permanent Representative to ASEAN and ASEAN-IPR Governing Council Member Elizabeth P. Buensuceso, who was the organizer of the event, said that she was very pleased at how the Symposium turned out and appreciated the active participation of the representatives of each ASEAN Member State in the discussions. She said that there are high hopes for the ASEAN-IPR and that the first symposium is just one of the many upcoming activities that the institute will undertake in strengthening its mandate to become the ASEAN Regions premier institution for promoting peace and reconciliation initiatives.

Executive Summary of the Symposium

The Symposium on Peace and Reconciliation Processes and Initiatives aimed to: 1) introduce the organization and work of the AIPR to its constituents; 2) study peace and conflict situations in the ASEAN/Asia-Pacific regions and other parts of the world and analyze resolution and reconciliation initiatives; 3) serve as a venue for stronger networking among members; 4) brainstorm on the most relevant research areas and best reconciliation methods; and 5) help frame its evolving thrusts and frame the most suitable organizational structure.

The Opening Ceremony, ushered in by a rendition by the Department of Foreign Affairs Chorale who sang Let there be Peace on Earth, was keynoted by then Philippines Presidential Adviser on the Peace Process, Secretary Teresita Quintos-Deles, the main architect of the CAB, while Department of Foreign Affairs then Undersecretary for Policy Hon. Evan P. Garcia and Permanent Representative of the Union of Myanmar to ASEAN H.E. Min Lwin, who served as Chair of the ASEAN-IPR Governing Council at the time, delivered the welcome remarks and message respectively.

Recommendations of the Symposium