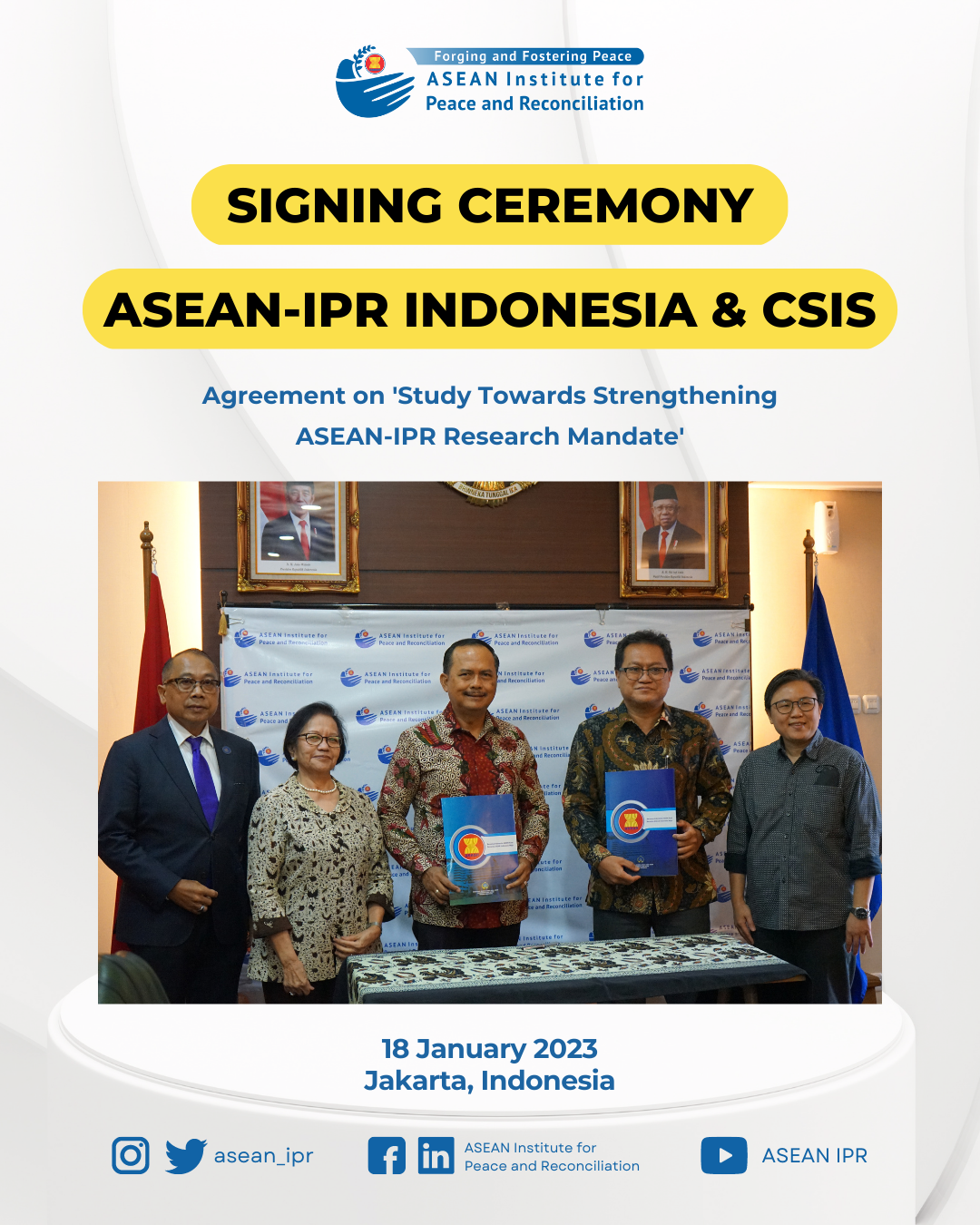 Ten years after its establishment in 2012, the ASEAN Institute for Peace and Reconciliation (ASEAN-IPR) has carried out various activities in pursuit of its mandate and functions. Such include research projects, capacity building programmes, online and offline webinars on various stages of peace processes, establishing the ASEAN Women for Peace Registry (AWPR), and reaching out to the peoples of ASEAN at large.

Following its first decade, ASEAN-IPR Indonesia initiated a timely project in reflecting the Institute’s journey, including how the ASEAN-IPR’s mandate as ASEAN’s research institution on peace and conflict resolution could be strengthened. Such project is entitled Study towards Strengthening ASEAN-IPR Research Mandate. It aims to assess and take stock of ASEAN-IPR’s capacity as a research institution, explore ways how the institution build research capacity and capability, brainstorm on practical ways to strengthen its research capacity – in accordance with its mandate, and most significantly – strengthen ownership of the ASEAN-IPR amongst ASEAN Member States.

To carry out the project, ASEAN-IPR Indonesia engaged with the Centre for Strategic and International Studies (CSIS) Indonesia. Thus, a Ceremony was held on 18 January 2023 to sign an Agreement between the two institutions, at the Office of ASEAN-IPR Indonesia in Jakarta, Indonesia. The Signing was officiated by H.E. Ngurah Swajaya, Representative of Indonesia to the ASEAN-IPR Governing Council, and Mr. Yose Rizal Damuri, Executive Director of CSIS Indonesia.

H.E. Ngurah Swajaya underlined that this Study is in line with the priorities of Indonesia as Chair of ASEAN in 2023, namely, to make ASEAN-IPR’s mandate and function more substantive, as well as raise awareness of the Institute to the peoples of ASEAN throughout all ASEAN Member States. Thus, he hoped that with this study, the peoples of ASEAN could better appreciate the process behind achieving and sustaining peace – a concept that they should never take for granted. Moreover, he expressed hope that following the study, the ASEAN-IPR could further its function as an ASEAN mechanism to positively contribute to sustainable peace in the region.

Mr. Yose Rizal Damuri highlighted that research can be a tool in finding ways to move forward and address sensitive issues through its variables. Thus, it is hoped that through the Study, challenges and/or limitations to the work of ASEAN-IPR could be narrowed. Moreover, Ms. Lina Alexandra, Head of Department of International Relations CSIS, and Project Manager of the Study, presented a Brief on the Research Activity portion of the Study. She informed that the research would explore views, challenges, as well as opportunities faced by the Institute, by engaging with the Institute’s various stakeholders.

Mr. I Gusti Agung Wesaka Puja, Executive Director of ASEAN-IPR, closed the Ceremony by reiterating that peace is not a one stop process, something that could not be taken for granted in ASEAN. Thus, through this Study, ASEAN Member States are taking action to embrace that peace is a continuing process that needs to be nurtured, among others by looking at ASEAN-IPR’s mandate and functions in a more holistic approach, thus optimising its activities.

The Study will be carried out in a six-month time period, aiming to generate short, medium and long-term recommendations for the Institute in moving forward.

Stay tuned to ASEAN-IPR’s Website and social media platforms on our upcoming activities, most of which are open to public participation. For inquiries, please contact us at ADMIN@asean-aipr.org.