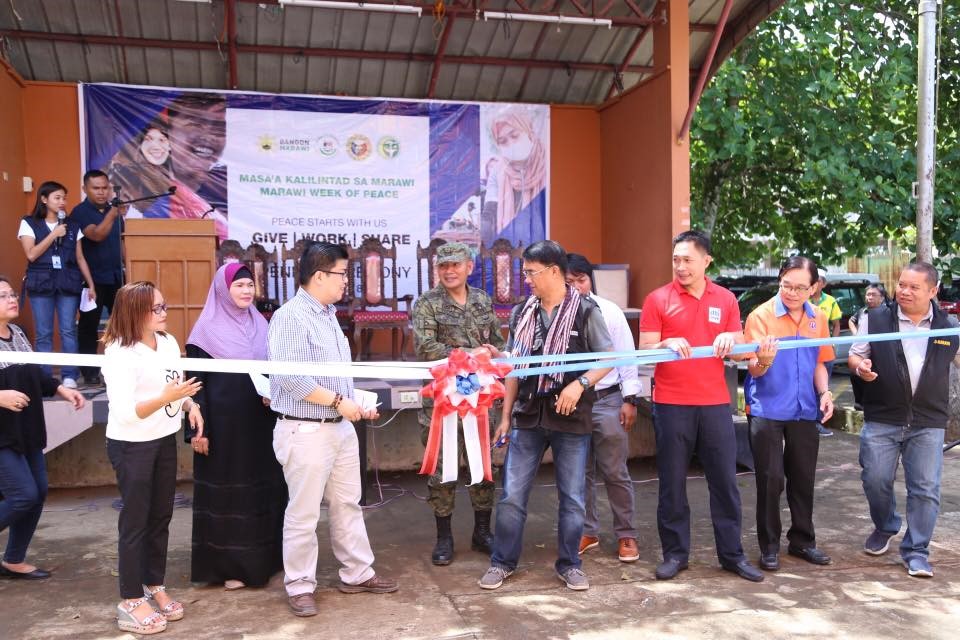 Dureza Let your voices be heard, Office of the Presidential Adviser on the Peace Process

Dureza: Let your voices be heard

OFFICE OF THE PRESIDENTIAL ADVISER ON THE PEACE PROCESS-WEDNESDAY, MAY 23, 2018

MARAWI CITY, MAY 23, 2018– Two girls clad in tundongs stood on stage, as they delivered a passionate rendition of the song “Bangon Marawi.”

An ulama’s chant reverberated across the gymnasium, as Muslim men and women joined him in solemn prayer.

Outside the venue, young residents held white balloons to symbolize their solidarity and commitment to peace.

These were among the many scenes at the provincial capitol here where the people of Marawi converged to commemorate the first year of the siege.

There was a mixed feeling of sadness and hope, especially among those who were affected by the crisis that claimed the lives of more than 1,000 individuals and destroyed billions worth of property.

In his remarks during the commemoration ceremony, Presidential Peace Adviser Jesus G. Dureza underscored the need for inclusivity and to actively involve the people in the rehabilitation process.

“Kayo ang dumaan ng kahirapan. Kayo ang nakakaalam para hindi na ito mangyaring muli (You are ones who went through these difficulties. You are the ones who know how this [siege] will be avoided),” Dureza said.

He urged the residents to be proactive and tell the government what they exactly need.

“Hindi kami ang nagdidikta. Dapat nanggagaling sa inyo (We are not imposing on you. [The suggestions] should come from you.),” Dureza said.

The peace adviser pointed out the government established Task Force Bangon Marawi to specifically address the needs of the people on the ground.

According to the government’s top peace negotiator, the task of rebuilding Marawi’s physical infrastructure is the easy part.

But he stressed the more difficult aspect is rebuilding the city’s “social fabric” that was torn apart by the armed conflict.

“Madali mag-rebuild pero mahirap ibalik ang kalooban ng mga tao (It is easy to rebuild but it is hard to restore the disposition of the people),” Dureza said.

He therefore called on the people to unite and support the efforts of the government.

“Magkaisa po tayo at magtulong-tulong (Let us unite and help each other.),” Dureza said.

At the same event, Marawi Mayor Majul Usman Gandamra noted the siege was one of the worst armed conflicts to ever happen in the region. The mayor stressed the need to learn from the lessons of the past.

“As we commemorate the siege, let us reflect on what happened,” he said.

Gandamra also paid tribute to the heroes of Marawi, especially the men and women in uniform who sacrificed their lives to liberate the city.

“They are the true heroes of the siege,” the mayor said.

Gandamra also thanked the Duterte Administration for the help extended to the city.

He said current rehabilitation efforts, however, must go hand in hand with the implementation of social justice.

“Ang pagbabago at kapayapaan ay dapat may kaukulang hustisya (Change and peace should be coupled with justice),” Gandamra said.

During his visit, Sec. Dureza also participated in a press conference organized by the provincial government to update the public on the governments ongoing rehabilitation efforts.

He also visited a temporary site for evacuees and held a dialogue with the people living there.