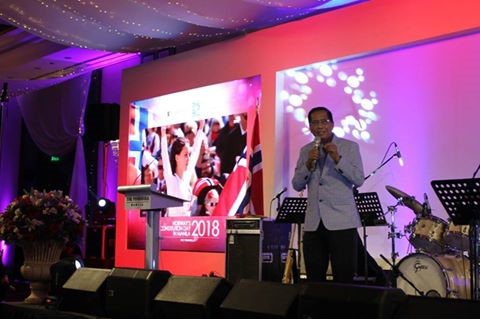 OFFICE OF THE PRESIDENTIAL ADVISER ON THE PEACE PROCESS-THURSDAY, MAY 24, 2018

MAKATI CITY, MAY 24 2018 – The Presidential Adviser on the Peace Process Jesus G. Dureza lauded the Norwegian Government for its relentless support to the Philippines peace efforts during the celebration of Norway’s Constitution Day on May 17.

“We, both the rebels and the government, cannot walk away from the negotiating table because Norway has consistently been there,” Dureza said.

“There is an umbilical cord that connects the government and the rebels and that is Norway. We cannot walk away because we know that Norway is still there and continuously shepherding us towards moving forward in the peace process,” he said.

They also served as the third-party facilitator of peace talks between the government and the Communist Party of the Philippines – New Peoples Army – National Democratic Front.

Dureza also expressed gratitude to Norway for assisting the Filipino communities in terms of employment.

He cited how Norway had trained and employed around 25,000 Filipinos as seafarers especially those who came from maritime schools ran by Norwegians.

Many of those who worked as seafarers came from the barrios and remote areas. It is always the dream of our people to improve the lives of their families and Norway had helped them in a quiet but effective way, Dureza said.

He noted how the Philippines also placed value on a persons life, stating their efforts to save Norwegian citizen Kjartan Sekkingstad, who was abducted by the Abu Sayyaf Group in 2015 and was released a year later.

This is not because we owe you so much but because saving one’s life is very important, Dureza said.

The Norwegian Constitution Day is being observed every 17th of May, wherein the countrys constitution was signed by the Eidsvoll Assembly in 1814. This recognized Norway as a kingdom independent of Sweden after the Napoleonic Wars. ###