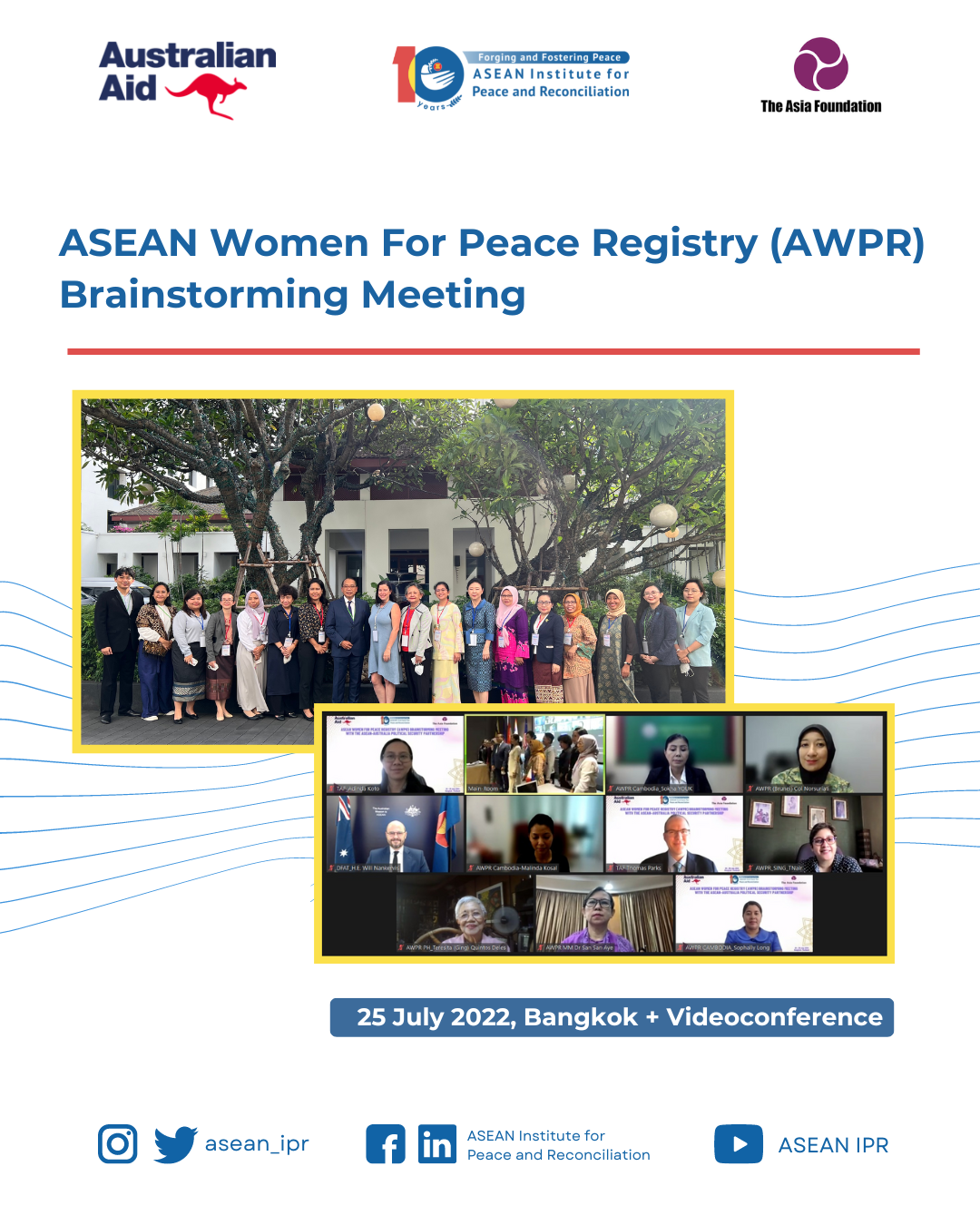 Members of the ASEAN Women for Peace Registry (AWPR) met in Bangkok, Thailand on 25 – 26 July 2022 to develop initiatives and activities that would be proposed for support under the ASEAN-Australia Political Security Partnership (APSP). In a hybrid setting, twelve (12) AWPR Members joined the meeting face-to-face for the first time since 2019, while eight (8) others joined the meeting virtually.

The first day was committed to a full-day brainstorming session facilitated by the ASEAN-IPR Secretariat and The Asia Foundation (TAF). The AWPR members came up with various ideas, such as peer-learning, networking forum, roadshow, lecture series, recommendations on development of National Action Plans on Women, Peace and Security (WPS) and other activities for proposal under the APSP.

Executive Director of ASEAN-IPR, Mr. I Gusti Agung Wesaka Puja, welcomed all AWPR Members and underlined that this has been one of the wish-list of ASEAN-IPR and AWPR in the past few years – to meet, to converse and to get to know each other better. Since the AWPR’s establishment in 2018, the ASEAN-IPR has counted upon the expertise of Members of the Registry in support of the Institute’s work. He was of the view that APSP’s support towards institutional strengthening and advocacy for AWPR could enable a greater contribution from AWPR towards conflict resolution and peacebuilding, and to a greater extent, towards the ASEAN Community.

Ambassador of Australia to ASEAN, H.E. Will Nankervis, recalled that at the 2nd ASEAN-Australia WPS Dialogue – which was co-hosted by Viet Nam and Australia, November 2021 – Australia reiterated their commitment to support the work of AWPR as one of the key components to Australia’s collaboration with ASEAN on WPS. Moreover, as ASEAN moves forward to recover from the impacts of the Covid-19 pandemic, the AWPR’s diverse spheres of expertise are instrumental in recovery and building back a more gender-responsive and inclusive region. Lastly, he viewed that the AWPR is well-placed to champion the WPS agenda that reflects the realities of women’s efforts to sustain peace and prevent conflict, to promote collective engagement in delivering the ASEAN Regional Plan of Action on WPS with stakeholders from across ASEAN and ASEAN Member States.

Following the brainstorming meeting, the AWPR met the following day for a closed-door AWPR only meeting to discuss the immediate priorities for the AWPR to carry out in the next few months, how they will work collaboratively and who will lead which initiative. The Members expressed enthusiasm to undertake and lead several initiatives for the later part of the year, to elevate the profile and credibility of the Registry.

The AWPR hopes to be able to meet more regularly in the future to fulfil their more proactive role as an expert resource directory for ASEAN on conflict prevention, conflict resolution and peacebuilding.