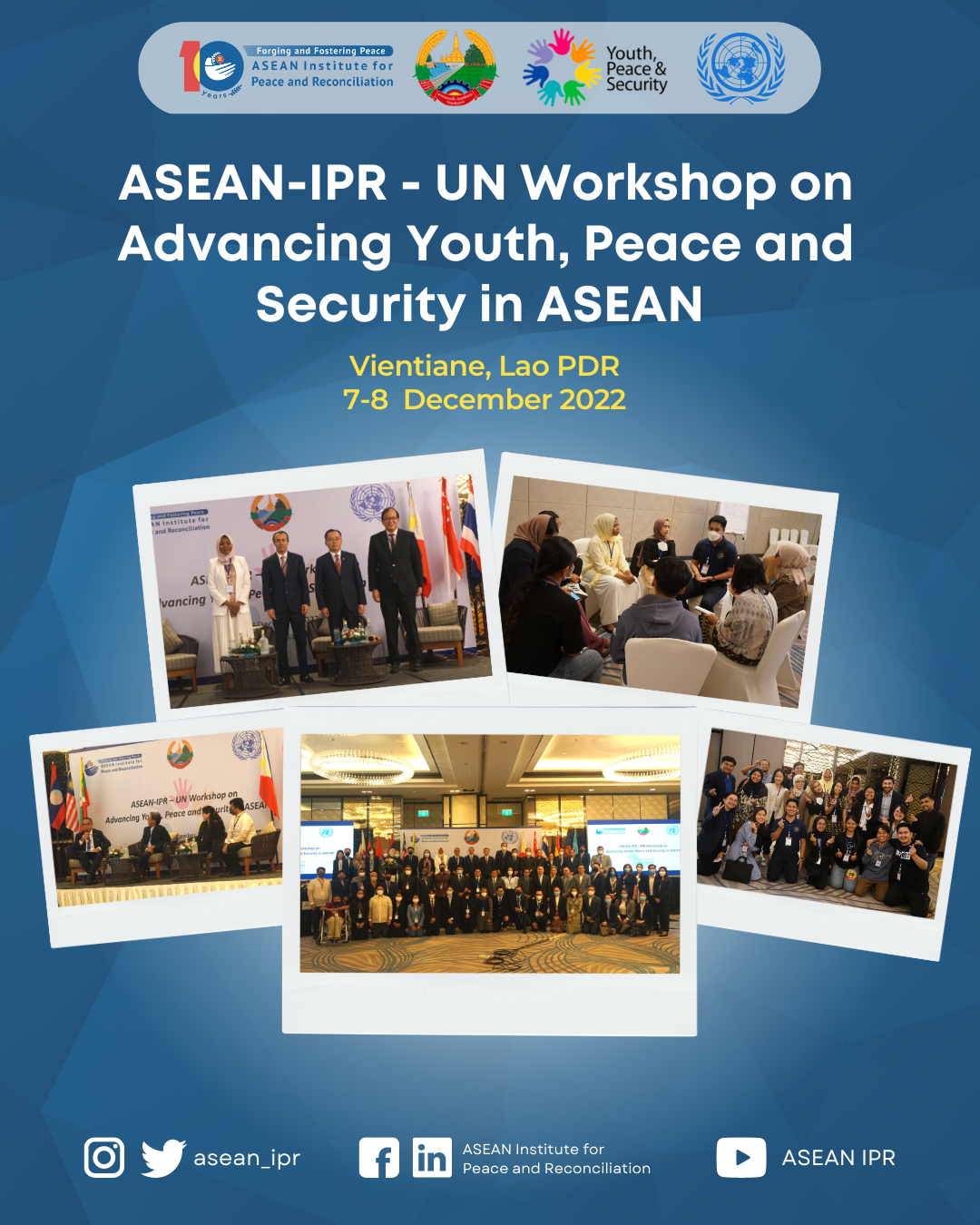 Youth experts and senior officials from the ASEAN Member States, together with high-level officials from the UN and other regional partners have come together to focus on the role of youth in peacebuilding and advancing the Youth, Peace and Security Agenda. H.E. Mr. Thongphane Savanhphet, Deputy Minister for Foreign Affairs, Lao PDR’s ASEAN SOM Leader, Lao People’s Democratic Republic opened the event, ‘Advancing Youth, Peace and Security (YPS) in ASEAN’, together with H.E. Michael Tene, the Deputy Secretary-General of ASEAN for ASEAN Political-Security Community and Mr. Khaled Khiari, Assistant Secretary-General for Political and Peacebuilding Affairs and Peace Operations of the United Nations.

“Peace and security are of priority for every country, region and the United Nations as they create enabling environments conducive for socio-economic development. Thus, maintaining and promoting sustainable peace and security is of utmost importance to everybody, nation, region and the world at large. To this end, it requires multidimensional approaches, close cooperation and collaboration among countries and nations and active and constructive contributions of all parts of society, including youth since youths make up a vast majority of population and they are future of every nation and a positive force in advancing just and inclusive society. I am pleased to note that cooperation to promote regional and international peace and security remains a key feature of the ASEAN-UN Comprehensive Partnership and continues to be undertaken through various ASEAN-UN Cooperation programmes and projects, including this ASEAN-IPR-UN Workshop on Advancing Youth, Peace and Security in ASEAN.” stated Deputy Minister Thongphane Savanhphet.

Noting that regional organisations such as ASEAN have a vital role to play in ensuring peace and security, UN Assistant Secretary-General Khiari said: “We have an opportunity to focus on youth as agents of peace in an increasingly complex world and how we can further advance the YPS Agenda in ASEAN so that youth can further contribute to peace and security in the region.” He added: “The identification of outcomes, ways forward and recommendations for policy makers, civil society and the UN will be the true test of the success of this forum.”

H.E. Michael Tene, the Deputy Secretary-General of ASEAN highlighted in his remarks: “This Workshop, timely as it is, indeed provides the opportunity for meaningful dialogue between relevant stakeholders, especially youth representatives, government officials, and regional/international organisations, to brainstorm ideas and formulate further recommendations leading to concrete actions by the policy-makers in ASEAN Member States.

The ASEAN-IPR – UN Joint Workshop on Advancing Youth, Peace and Security in ASEAN is jointly organised by the Ministry of Foreign Affairs of the Lao People’s Democratic Republic, the ASEAN Institute for Peace and Reconciliation, and the United Nations.

Advancing YPS in ASEAN is the latest in an annual series of ASEAN-UN regional dialogues on political-security cooperation, since the ASEAN-UN Comprehensive Partnership was adopted by the Leaders of ASEAN and the United Nations Secretary-General in November 2011 in Indonesia.