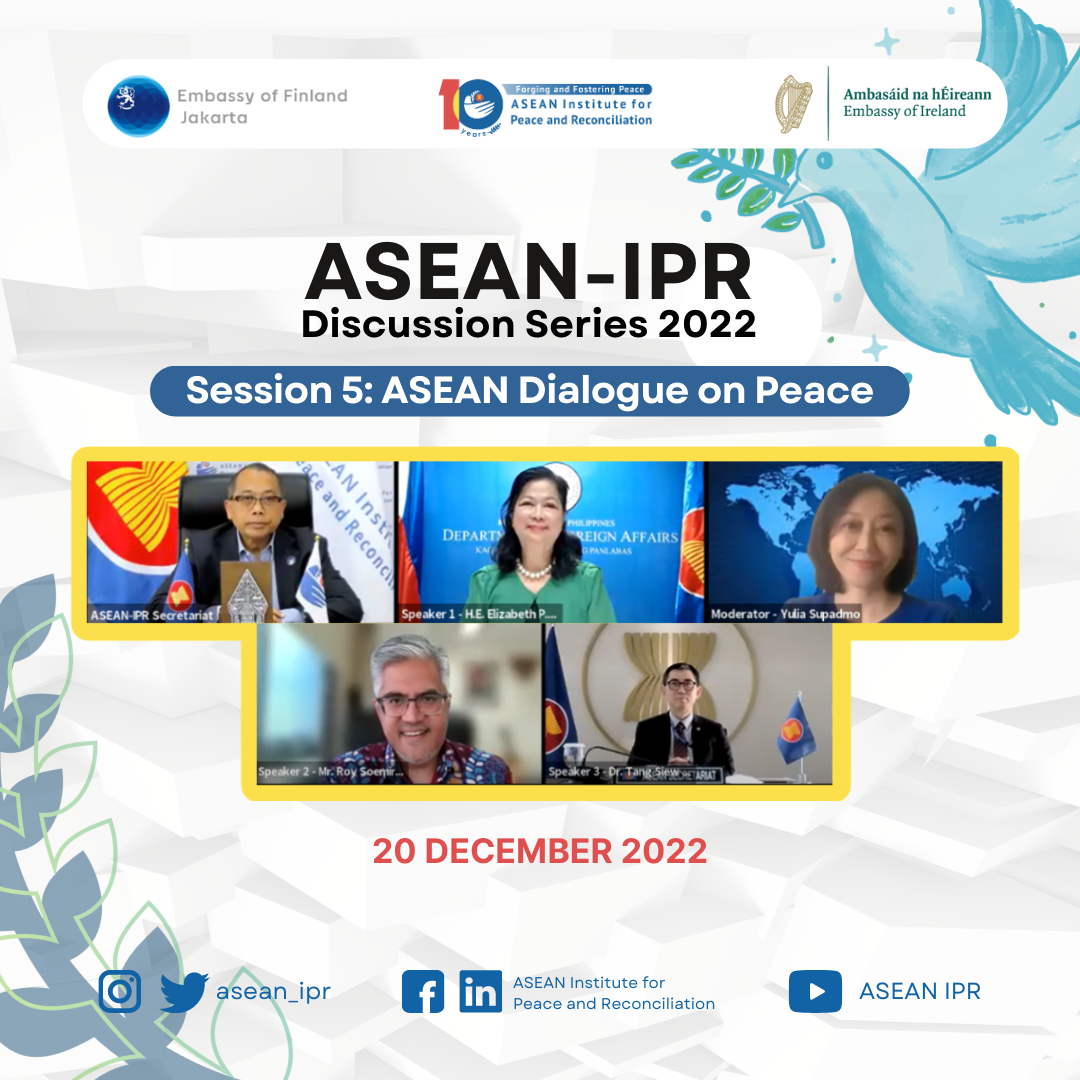 Over 130 (One hundred thirty) participants attended the fifth and last session of the ASEAN Institute for Peace and Reconciliation (ASEAN-IPR) Discussion Series 2022, that was conducted on 20 December 2022. Taking the theme “ASEAN Dialogue on Peace” this last session of Discussion Series 2022 is organised in conjunction with the Institute’s 10th Anniversary commemoration was conducted on  through virtual webinar platform and live-streamed on the Institute’s YouTube Channel. Given the constantly changing and dynamic nature of challenges faced by the region, the Session aimed to explore Southeast Asia’s recent political and security developments, examine existing ASEAN mechanisms, and foresee possible future challenges and/or opportunities in the region, particularly in preparation for Indonesia’s ASEAN Chairmanship in 2023.

This session was moderated by Ms. Yulia Supadmo (Editor-in-Chief, Rajawali Television). Three prominent speakers from the region were invited as resource persons, namely: H.E. Elizabeth P. Buensuceso (Philippines’ Eminent Person to the High-Level Task Force on ASEAN Community’s Post-2025 Vision), Mr. Rolliansyah Soemirat (Director for ASEAN Political-Security Cooperation, Ministry of Foreign Affairs, Indonesia), and Dr. Tang Siew Mun (Director for Political and Security, ASEAN Secretariat). Each speaker shared their knowledge and views on Southeast Asia’s political and security outlook for 2023, particularly under the framework of ASEAN regional cooperation and how ASEAN and ASEAN-IPR could position itself in contributing to the region’s community-peacebuilding efforts.

With the ongoing process of formulating the Post-2025 ASEAN Vision, the discussion started by exploring megatrends and directions that were taken into consideration in the formulating ASEAN’s Post-2025 Vision, namely – US-China political rivalry, Indo-Pacific strategy, the rise of pandemic and other public health emergencies, increased protectionism, and fourth Industrial Revolution. Moreover, the first part of the discussion brought suggestions on possible ways forward on ASEAN-IPR’s role in the Post-2025 Vision and in mitigating future challenges. Such include: (1) inculcating the culture of peace, (2) addressing the weakest link among ASEAN Member States, (3) operationalising and empowering the ASEAN Women for Peace Registry (AWPR) under the women, peace & security (WPS) agenda; and, (4) empowering they youths as agents of peace.

Furthermore, in the wake of Indonesia’s Chairmanship of ASEAN next year, discussions zoomed into Indonesia’s plan for 2023 and explored how Indonesia will expand ASEAN’s role in maintaining regional and global peace. Currently, Indonesia plans to work under two (2) big frameworks – namely continuity and change. These two are the main values ​​of Indonesia’s focus to retain previous commitments and adjust to future challenges in its leadership. Furthermore, the focus of Indonesia chairpersonship is also reflected clearly in its theme, “ASEAN Matters: Epicentrum of Growth.” This means that ASEAN must remain relevant, important, agile, adaptive, and competitive in facing challenges and future threat. In addition, the discussions also took note some political-security issues that will be highlighted in 2023 which includes, but not limited to maritime security cooperation, promotion and protection of human rights, South China Sea, transnational organised crime, and the issue of Myanmar.

The discussion emphasised two major points to be the basis for strengthening ASEAN Political-Security Cooperation (APSC) namely, trust and unity of purposes. Aside from that, the discussion highlighted the need to balance between national and regional interests. In doing so, ASEAN needs to find and align common interests.

If you missed this session, or if you would like to see it again, head on to the ASEAN-IPR’s YouTube channel to see the whole session’s recording. Be sure to subscribe to our YouTube channel, check out our website and follow our social media for the latest information and/or updates on our activities.