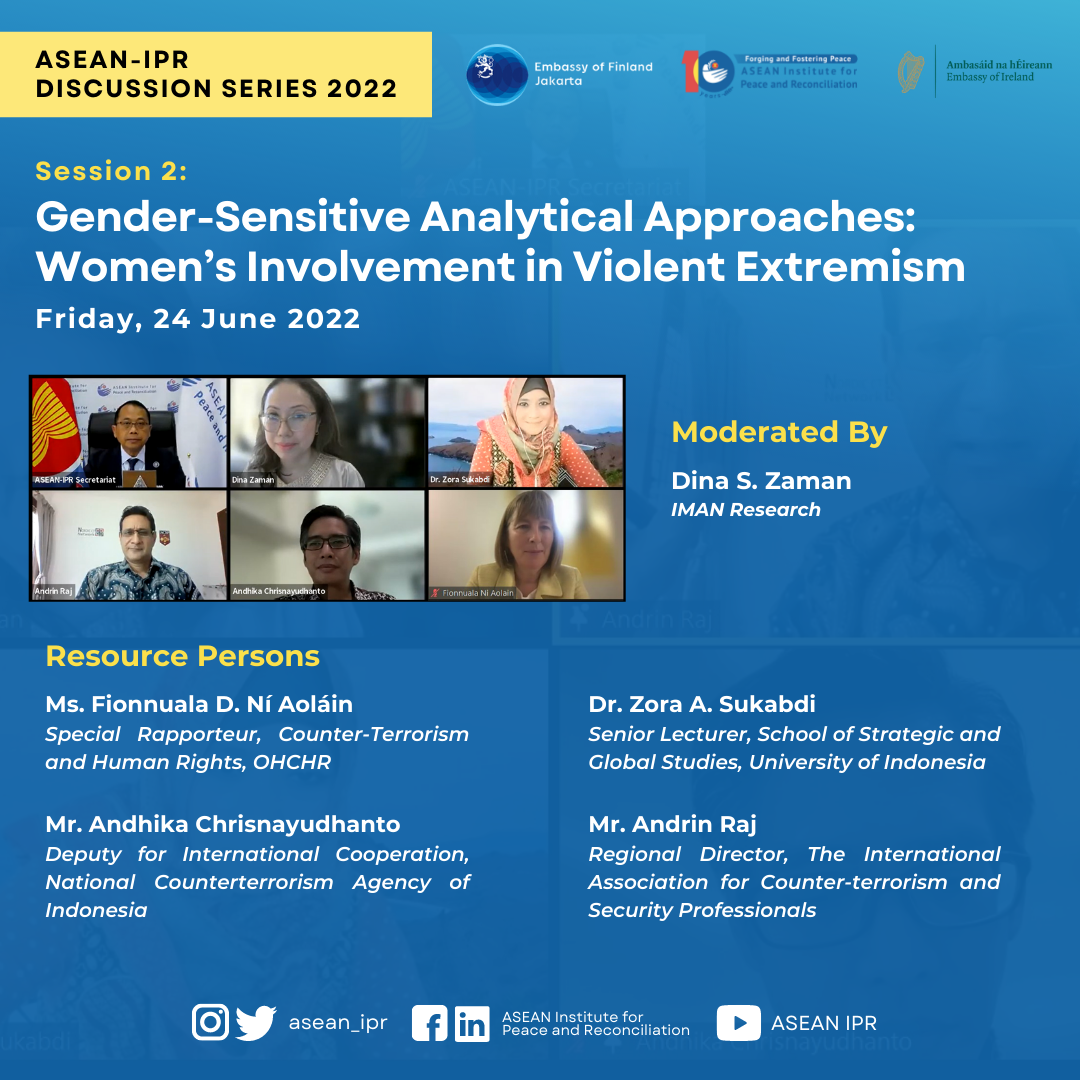 Over 120 participants attended the second session of the ASEAN Institute for Peace and Reconciliation (ASEAN-IPR) Discussion Series 2022, with the theme “Gender-Sensitive Analytical Approaches: Women’s Involvement in Violent Extremism” that was conducted on 24 June 2022 through Zoom Webinar Platform and the Institute’s YouTube Channel. This year’s Discussion Series is organised in conjunction with the Institute’s 10th Anniversary commemoration. Looking at the recent pattern  of increased involvement of women in extremist groups and acts of terrorism, the Session looked at gender sensitive approaches in addressing under-explored questions regarding the difference in the experience of women compared to men in their path towards radicalisation, escalating violence, terrorist motivations, roles, and factors that can sustain their continued involvement in violent extremism. Moreover, it is important to note that the gender-based difference in experience would also most likely be related to  the disproportionate impact it has particularly on women.

The session was moderated by Ms. Dina S. Zaman from IMAN Research. Four experts with insights from inside and outside the region were invited as resource persons, namely: Ms. Fionnuala D. Ni Aolain (Special Rapporteur on Counterterrorism and Human Rights, UN OHCHR), Mr. Andhika Chrisnayudhanto (National Counterterrorism Agency of Indonesia), Dr. Zora A Sukabdi (University of Indonesia) and Mr. Andrin Raj (International Association for Counter-terrorism and Security Professionals). Each speaker shared their perspective and experiences towards the gender analytical approaches discourse on radicalism and violent extremism – namely to elaborate further on the trends of increasing women’s involvement in violent extremism groups and activities, as well as to provide clear examples of national, regional, and even global frameworks that have implemented these approaches in Preventing and Countering Violent Extremism (P/CVE) efforts. The speakers also underlined the varying levels of risk, vulnerabilities and roles of women in different contexts within violent extremist groups that are yet to be recognised by governments and counterterrorism programs.

The discussion took note several driving factors and motivations for women’s involvement in violent extremist groups; including both push factors such as socio-economic conditions, and pull factors such as propaganda designed by recruiters. It was highlighted that violent extremist groups often promise a better status and life for women that could not be provided by other parts of society. In this context, women experience two-fold pressure – coming from both state and non-state actors. Therefore, acknowledging and addressing the lack of equal status of women in society is a very important step to mitigate this specific issue.

In addition, further zooming into the overlooked aspects of gender-sensitive approaches to P/CVE, increased involvement of societal figures and civil society organisations such as religious leaders and grassroot communities are recommended to complement governmental initiatives in the mitigation of women’s involvement in violent extremism. In some areas of Southeast Asia, religious civil society organisations could aid the government to implement regulations and National Action Plans in regard to this issue. Furthermore, the speakers’ concurred that humanitarian principles and human rights should not be neglected by governments and law enforcement authorities when implementing the Women, Peace, and Security (WPS) Agenda, particularly by conducting CVE in a professional manner that upholds these “Do No Harm” principles. Discussions further jumped into the conclusion that women should also be involved in all decision-making processes related to the prevention and countering of violent extremism.

Be sure to subscribe to the ASEAN-IPR’s YouTube Channel, and follow our social media for the latest information and/or updates on our activities and stay tuned for upcoming sessions of the Online Discussion Series 2022.