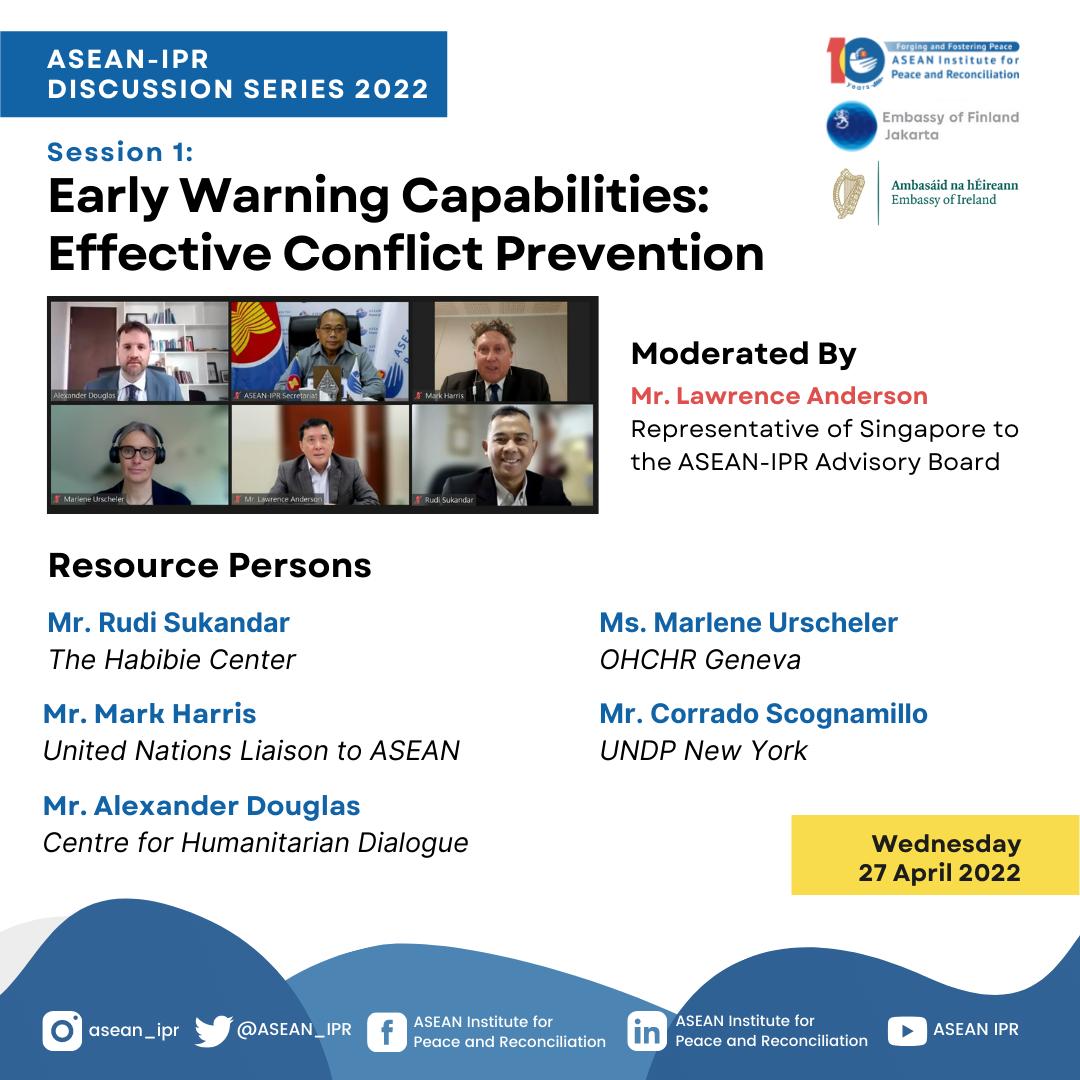 Over 100 participants attended the return of the ASEAN Institute for Peace and Reconciliation’s (ASEAN-IPR) Discussion Series, which has become a signature activity for the ASEAN institutions, and this year is especially organised in conjunction with the commemoration of the Institute’s 10th anniversary. The first session of the year took the theme of “Early Warning Capabilities: Effective Conflict Prevention”, and convened on 27 April 2022 through Zoom Webinar platform, and livestreamed on the Institute’s YouTube Channel. As an effort to be forward looking, the ASEAN-IPR is mindful that challenges in Southeast Asia could become greater with recent geopolitical dynamics affecting the region, including rivalries between major powers. Therefore, discussions on the development of possible early warning capabilities, systems and mechanisms are significantly important in anticipating and preventing local, regional, and international conflicts to occur and/or escalate within the region.

The Session was moderated by Mr. Lawrence Anderson, Representative of Singapore to the ASEAN-IPR Advisory Board. Four experts from inside and outside the region served as resource persons, namely: Rudi Sukandar, Ph.D. (The Habibie Center), Mr. Alexander Douglas (Centre for Humanitarian Dialogue), and representatives from the United Nations – including Mr. Mark Harris (UN Liaison to ASEAN), Ms. Marlene Urscheler (Office of the High Commissioner on Human Rights (OHCHR)) and Mr. Corrado Scognamillo (United Nations Development Project (UNDP) New York). Each speaker shared their expertise and highlighted different approaches on early warning capabilities based on their respective organisation’s experiences–at the local, regional as well as the global level. All speakers concurred that recent developments of regional and international politics reflected the need for effective conflict prevention through the setting up of early warning mechanisms.

Discussions took note that ASEAN has actually already been acting as an early warning system itself, considering that it has collected information, analysed, and responded effectively to conflicts within the region and emerging conflict risks. However, there is a need to enhance such capabilities, keeping in mind that the region may be facing an upcoming escalation of geopolitics. Therefore, it is pertinent for ASEAN to learn from experiences of conflict prevention at national level of its Member States and take comparative lessons from other regions to seek best practices of such capabilities. Moreover, discussions also highlighted that the development of early warning capabilities should adopt a human rights perspective in conflict risk analysis – which is not only important to ensure the effectiveness of its function, but also its sustainability.

Discussion further in the Session also zoomed into the capabilities of ASEAN and institutions under it, such as the ASEAN Regional Forum (ARF) and the ASEAN Intergovernmental Commission on Human Rights (AICHR), to respond to existing and emerging threats found within the region. Such may include, among others, human rights violations and disinformation, as well as non-traditional security threats such as radicalism, violent extremism and terrorism–and what would be the requirements to create an early warning system to prevent their occurrence. Due to its multi-faceted nature, conflict prevention efforts in the region should recognise the roles and contributions made by governments of ASEAN Member States as well as civil society organizations (CSOs), and incorporate such roles and contributions, in order to advance the development of early warning capabilities.

Be sure to subscribe to the ASEAN-IPR’s YouTube Channel and follow our social media for the latest on our activities and stay tuned for upcoming sessions of the ASEAN-IPR Discussion Series 2022.