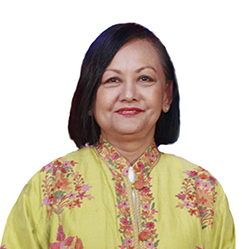 Amina Rasul-Bernardo is the President of the Philippine Center for Islam and Democracy. She is a member of the Board of Regents of Mindanao State University. One of the leading Muslim leaders in the Philippines working to strengthen peace and development as well as promote human rights, justice and democratic practices in Muslim Mindanao, she has spearheaded the organizing and capacity-building of Muslim women, particularly those who teach in the madrasah, for peace-building and prevention of violent extremism. Her efforts led to the establishment of the Noorus Salam (Light of Peace), an organization of Muslim women active in Mindanao and Muslim communities in Metro Manila. She has developed an Islamic peace education program in cooperation with Muslim religious leaders.

She has been a Trustee and Vice-Chair of the Ramon Magsaysay Awards Foundation.

She has written & edited several books on the Mindanao conflict, Islam, and democracy such as Broken Peace? Assessing the 1996 GRP-MNLF Final Peace Agreement and The Radicalization of Muslim Communities in Southeast Asia.

She was a UN PEACE awardee for 2019. In 2007, she received the Muslim Democrat of the Year Award from the Washington, DC-based Center for the Study of Islam and Democracy (CSID) and is recognized as one of the 500 Most Influential Muslims by the Royal Aal al-Bayt Foundation of Jordan.

She holds a bachelors degree in economics from the University of the Philippines, an MBA from the Asian Institute of Management, and a masters in public administration from Harvards Kennedy School of Government.