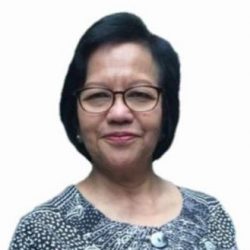 After returning from Vietnam, she served as the Head of the Policy Planning Agency of the Ministry of Foreign Affairs of the Republic of Indonesia until her retirement in 2010.

After her retirement, she served as the Executive Secretary to the Presidential Advisory Council on Foreign Affairs, Dr. N. Hassan Wirajuda from March 2011 until October 2014. She also served as the Eminent Person’s Group representing Indonesia to the Indian Ocean Dialogue in 2015.

In addition to being a diplomat, Ambassador Tobing also lectured at the graduate program on ASEAN Diplomacy at the Paramadina University from 2014 until 2017 and also at Pelita Harapan University for the international program. She has also been involved in mentoring Senior Level Diplomats at the Ministry of Foreign Affairs Educational Training Institute since 2015.

Born in Jakarta, Ambassador Tobing earned a Degree in English Literature from the University of Indonesia in 1976 and was awarded the Fulbright & Hayes Scholarship for her Master’s degree in American Studies at the George Washington University in Washington DC from September 1976 – June 1978.