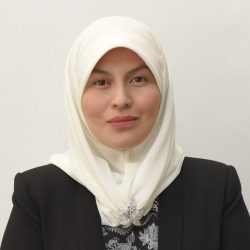 After graduating with an LL.B from University of Wales, Cardiff in 1999 and being called to the Bar at Lincolns Inn, England in 2000, Ms Riana joined Civil Service in October 2000 as a Counsel at the Attorney Generals Chambers (AGC) of Brunei Darussalam. She was promoted to Deputy Senior Counsel in 2011 and in 2012, she obtained her LL.M in Public International Law from Queen Mary, University of London.

She represented Brunei Darussalam at the 6th Committee for the 59th United Nations General Assembly, was the focal person for ASEAN Senior Law Officials Meeting (ASLOM), ASEAN Law Association (ALA) and Commonwealth Senior Officials of Law Ministries Meeting (SOLM) from 2004-2016, a delegate for the High Level Legal Experts Group (HLEG) in 2009, lead negotiator for the Legal and Institutional Issues Working Group for the Trans Pacific Partnership Agreement (TPP) negotiations and chaired on behalf of ASEAN a number of meetings for the Working Group on Legal and Institutional Issues for the Regional Comprehensive Economic Partnership Agreement (RCEP).

She received the ALA Outstanding Service Award on the occasion of the 50th Anniversary of the ASEAN Law Association on 25 October 2017.

On 13 May 2020 she was transferred to the Ministry of Foreign Affairs. She is currently the Acting Director of the Dept of Policy Planning and also Head of the Treaties Division.