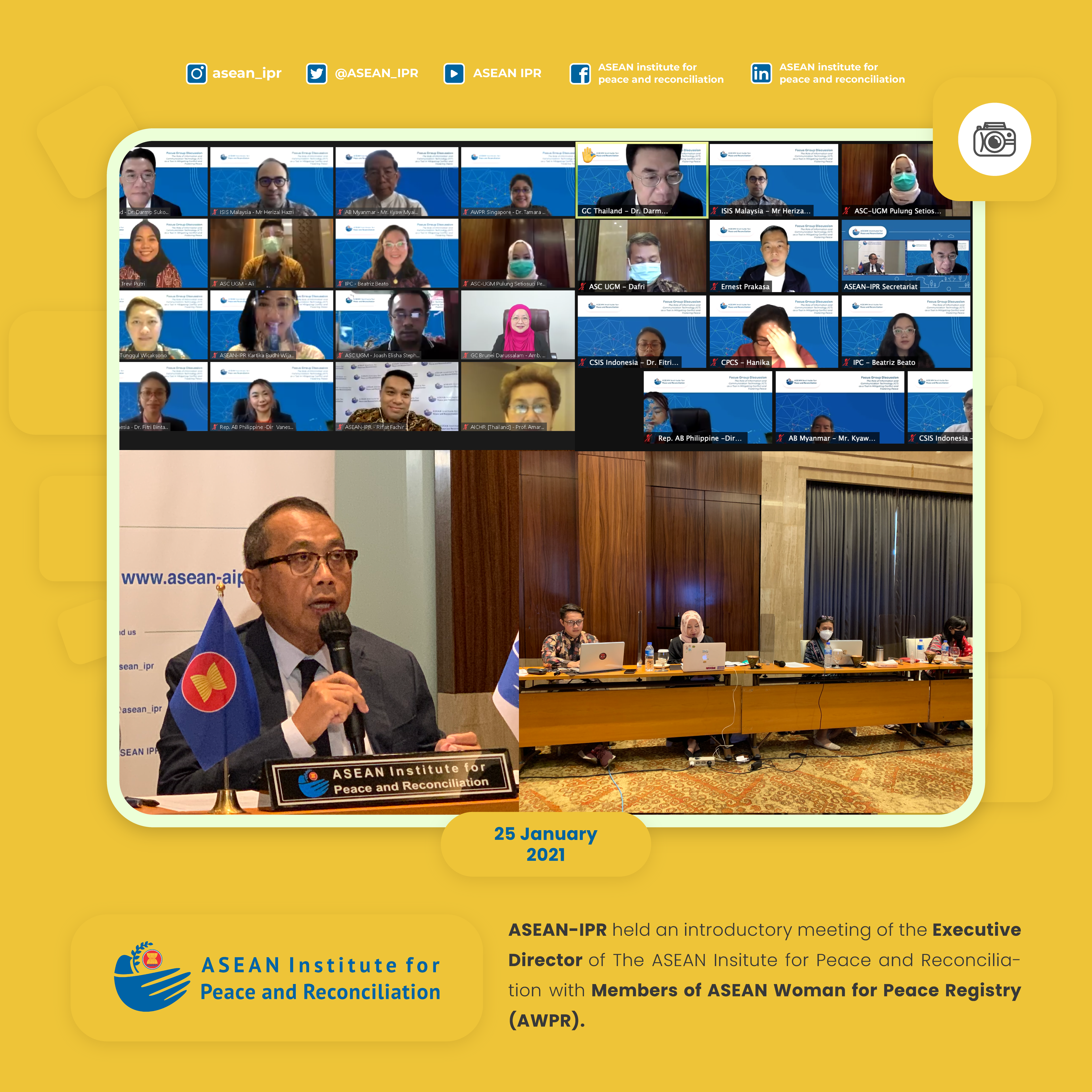 Lately, the use of information and communication technology (ICT) to create discord has received far more attention than ICT used to promote peace. As we have seen in recent past, the manifestation of misinformation has affected elections, created confusion in midst of a public health crisis and fermented communal disharmony. Such points were highlighted by the Executive Director (ED) of ASEAN Institute for Peace and Reconciliation (ASEAN-IPR), Mr. I Gusti Agung Wesaka Puja, when he officiated the very first Focused Group Discussion (FGD) of the Institute, taking on the theme The Role of ICT as a Tool in Mitigating Conflict and Fostering Peace.

Around 25 participants ? coming from the Institutes Governing Council, Advisory Board, the ASEAN Women for Peace Registry (AWPR), representatives from Southeast Asian think tanks, as well as mainstream and social media influencer representative, actively contributed to the discussions. The ED of ASEAN-IPR further underlined that through this FGD, we could discuss how we can master this man-made creation to support efforts in mitigating and managing the causes and consequences of conflict, as well as build and maintain peace. The FGD is convened in collaboration with the ASEAN Studies Centre of Gadjah Mada University (ASC-UGM) in Yogyakarta, Indonesia. Due to the on-going Covid-19 pandemic, the FGD followed a hybrid format of online and offline participants, with the co-hosts (ASEAN-IPR Secretariat and ASC-UGM) organising from Yogyakarta, Indonesia.

The FGD dove into ? among others ? (i) how ICT, in particular governance of cyberspace, can assist in addressing fake news, falsehoods and misinformation in the context of domestic or regional conflicts; (ii) the role of social media influencers in mitigating conflict and forging peace, and how states can and should engage them; (iii) how to manage the use of ICTs and social media platforms for information crowdsourcing, especially in conflict hotspots; and, (iv) State support for peacekeeping initiatives on ICT platforms.

During discussions, it was highlighted that education and youth empowerment in increasing media literacy are the best defences to tackle fake news and misinformation, considering the fast-paced development of ICT and the spread of information; some also suggested that the ASEAN-IPR could take part in this empowerment of the youth. Others emphasised the potential of ASEAN-IPR in helping supplement ASEAN Sectoral Bodies in engaging with parliamentary bodies, so discussions on addressing fake news could be further addressed through appropriate laws. When engaging social media influencers to support the government in countering/mitigating conflict/misinformation, some discussants voiced their views on the importance to consider the value and integrity of such influencers. Also discussed were ways in maintaining internet security while disseminating conflict-related info ? such as increasing ICT infrastructure and human capacity (i.e., digital literacy, cyber hygiene, safety training), create and update policy guidance for digital peace mediation and conflict mediation, and periodic risk and threat assessment to create early warning system. Equally important were views on how to include the digital voice of ASEAN civil society.

Moreover, some ideas for research and/or capacity building projects were mentioned ? whether to be taken up by the ASEAN-IPR, or other institutions in the region. This includes (i) research on the role of social media influencers in spreading messages; (ii) capacity building based on research/big data analysis on ICT in conflict prevention; and, (iii) baseline study on Member States acceptance on governance of ICT, which may be further developed into how this could be taken up at the regional level in ASEAN.

The ASEAN-IPR FGD series is envisioned to be a regular activity of the Institute, to engage more actively and become a platform for collaboration with think tanks in the region, in support of each others work. The FGD series endeavours to share best practices, lessons learned and other relevant information between the ASEAN-IPR and like-minded institutions in the region and beyond, with similar objectives aimed at promoting a culture of peace.

For more information on the ASEAN-IPR, please visit our website http://asean-aipr.org, and follow us on our social media ASEAN Institute for Peace and Reconciliation or @ASEAN_IPR.